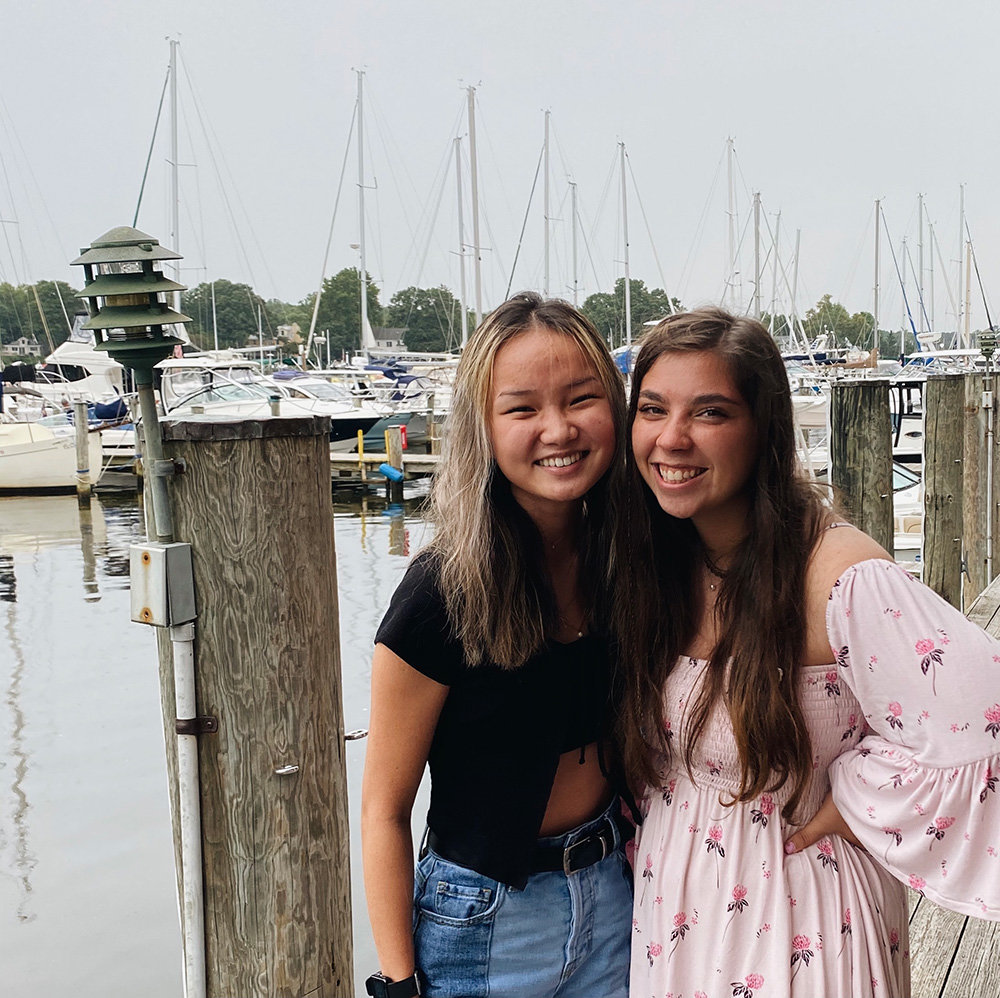 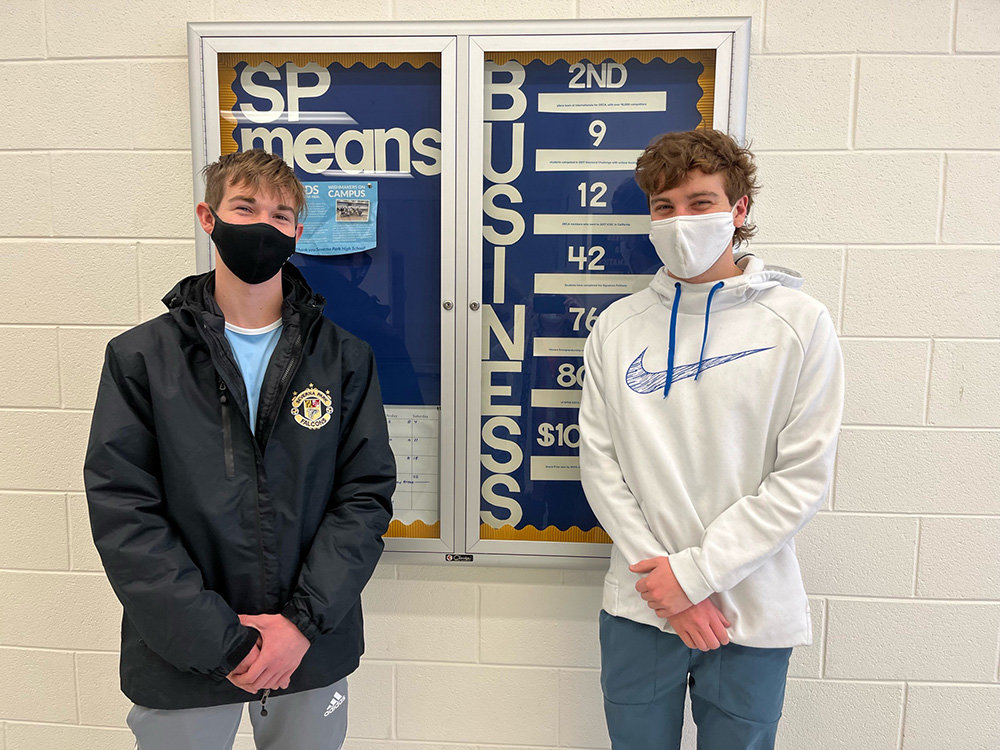 Josh Higgins (left) and Tyler Moran raised money, collected donations of video games and frozen dinners, and volunteered at the Port to Fort 6K sponsored by Believe In Tomorrow. 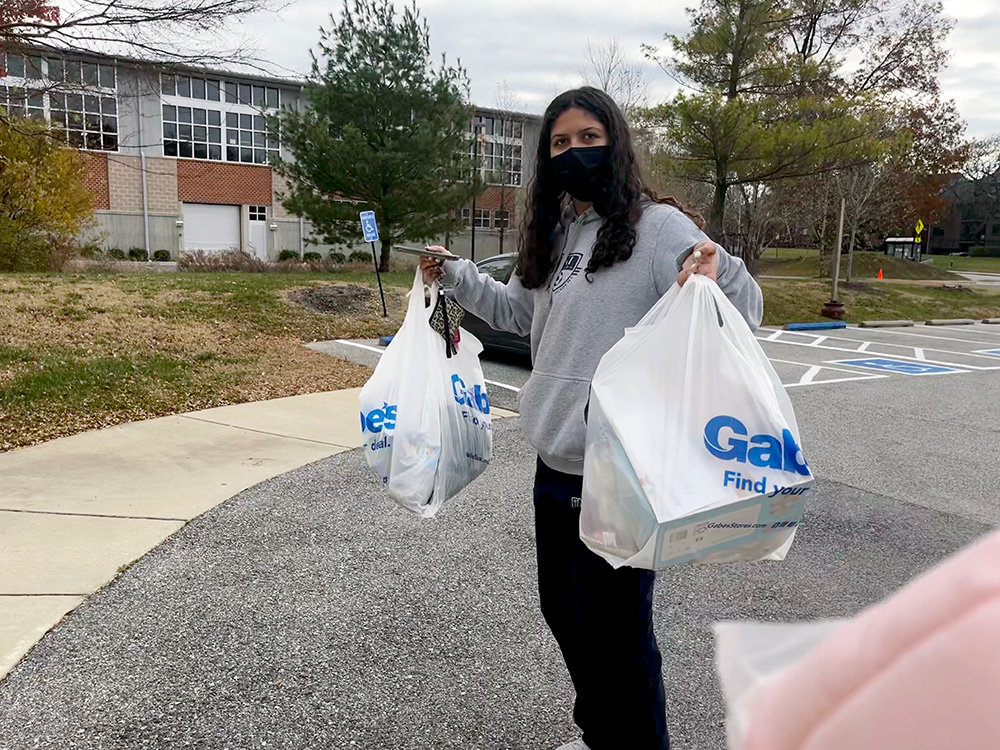 Janna Chang and Joi Fleming chose to support the Angel Tree program because they wanted to help children in unfortunate situations feel joy during Christmastime. 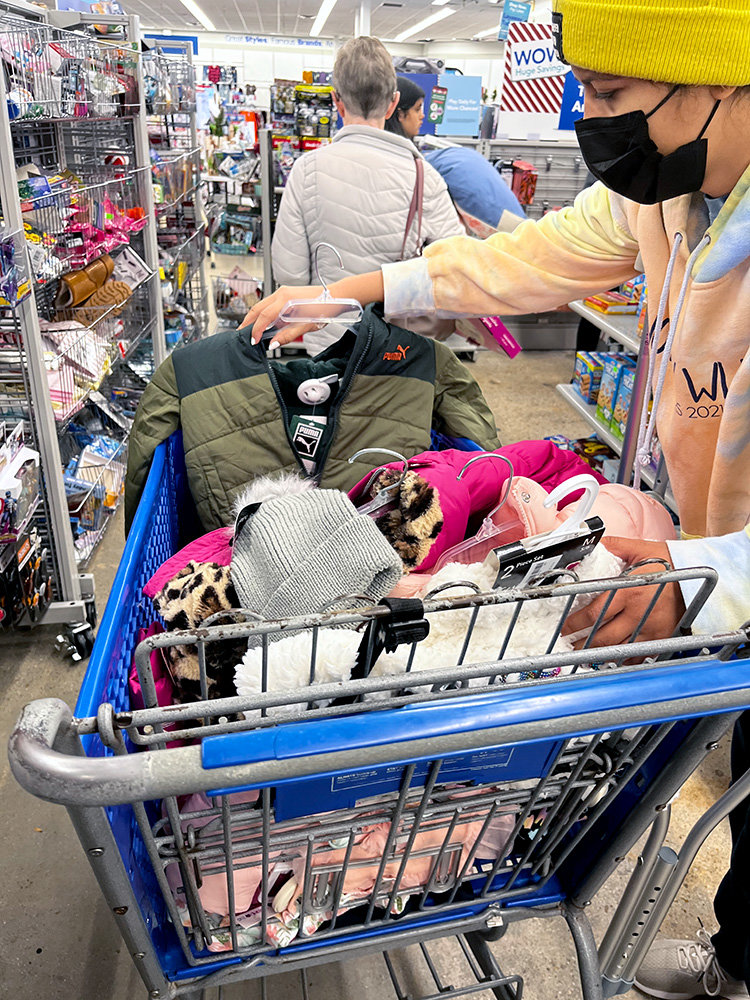 Janna Chang and Joi Fleming chose to support the Angel Tree program because they wanted to help children in unfortunate situations feel joy during Christmastime.
Previous Next
Posted Wednesday, January 19, 2022 11:23 am

Each year, students in the Severna Park High School Leadership Institute make a difference in their community and raise awareness for a cause. The three-year course culminates in the seniors leading a Leadership III service project of their own. These are some of the projects completed this academic year.

A group led by seniors Summer Sims and Lily Becker partnered with the Ivy Girl Academy to teach girls to overcome insecurity and make meaningful relationships with others in their lives through the Ivy Girl curriculum during the fall.

Ivy Girl Academy began with the founder, Jessie Funk, being bullied, suffering from bulimia, and dealing with her parents’ divorce. She noticed that this internal stress and anger resulted in her becoming a bully. She formed the Ivy Girl Academy to create workshops, camps, and lessons that teach girls how to go through adolescence with confidence and respect while also preparing them to be the leaders of the future.

To accomplish their mission of helping young girls gain confidence and knowledge surrounding ladyhood, Sims and Becker met with a group of five middle school girls. During these meetings, they taught 12 lessons of ladyhood provided by the Ivy Girl Academy. With help from the Leadership I students, they also raised more than $200 to donate to Ivy Girl, met with the girls virtually, and instilled the values and lessons that Ivy Girl Academy spreads in the community.

Tyler Moran and Josh Higgins partnered with the Believe In Tomorrow Children’s House at Johns Hopkins Children’s Hospital to raise money and facilitate donations for the foundation. The Believe In Tomorrow Children’s House provides housing and accommodations to the families of children receiving treatment. Their goal is to keep families together during a child’s medical crisis, as the presence of normal family life in these hard situations has a powerful influence on the healing process.

Moran and Higgins raised money, collected donations of video games and frozen dinners, volunteered at the Port to Fort 6K sponsored by Believe In Tomorrow, and brought guest speaker Kelly Nguyen to their school to talk about Believe In Tomorrow.

“It was rewarding to see the gratitude on the people’s faces at the event, and it showed how we can really make an impact in our community,” Moran said.

Higgins added, “I definitely learned a lot about service and leadership from the experience. It’s always humbling to help out with great organizations like Believe In Tomorrow, and I’m grateful we had the chance to make a difference.”

Janna Chang and Joi Fleming worked with the Annapolis Salvation Army’s Angel Tree program. After reaching out in the summer of 2021, the girls raised money in the Severna Park community throughout the fall before purchasing gifts and delivering them to Annapolis Salvation Army branch headquarters before the deadline on December 3. The girls aimed to raise $200 to buy the gifts for three children. In total, they raised over $1,000. After spending $300 on the gifts for their three sponsored kids, they were able to donate over $700 to directly support the Angel Tree program.

The girls chose to support the Angel Tree program because they wanted to help children in unfortunate situations feel joy during Christmastime.

“Although we didn’t get to see the gifts be received because the families and sponsors were kept anonymous, when we dropped the gifts off, it felt gratifying knowing we were helping to make a difference after such a tough year,” Fleming said. “It made us appreciate what we have.”

Chang and Fleming also aimed to increase participation in the program. Through the help of their group of underclassmen, they designed and hung up 20 posters around their high school and community.

“We’d like to thank our team, Athena Vangraefschepe, Khyla Boodoo, Ryn Feemster, Nathan Quinn and Grace Min, for helping us pull off our project,” Chang said. “Without their help, we wouldn’t have been able to promote our project and fundraise as much as we did.”

To aid their community during the ongoing COVID crisis, seniors Rory Wahlig and Grace Marburger raised donations for a homelessness and crisis center just outside of their town, in Fort Meade.

Sarah’s House, the organization the girls worked with, helps residents of Anne Arundel County and surrounding areas by providing temporary shelter, food and other forms of support to people in need. The nonprofit organization relies heavily on donations from the public.

To accomplish their goal of helping Sarah’s House, Wahlig and Marburger held a Chipotle fundraiser night, accepted monetary donations from friends and family, and put out donation bins to collect items that were needed.

Wahlig and Marburger partnered with five underclassmen in Leadership 1 who greatly aided their project by posting on social media and informing their families about the need to give to Sarah’s House. They raised just over $690 and collected many items that were delivered to Sarah’s House in January.

Jenny Bertha and Mackenzie Farrell partnered with the Ronald McDonald House (RMDH) in Baltimore to support children with life-threatening illnesses and their families. The girls planned to raise money, collect pull tabs and collect supplies as a part of their Leadership III project, Helping Hands.

The Ronald McDonald House provides shelter for families whose children are fighting life-threatening illnesses. Each night, the organization also gives hot meals and homes to 42 families, totaling 2,400 families per year.

Josie Dike and Kylie Milton partnered with the Maryland Society for the Prevention of Cruelty to Animals (SPCA) to raise money, pet supplies and awareness for animals in need at the SPCA’s shelter and around the community.

Founded in 1869, the Maryland SPCA has endured with the motto that “every animal deserves to be treated with compassion and care.” Located in Baltimore, the organization not only houses animals in need of shelter but also provides veterinary services and even food for pet owners in need. Vaccinations and certain surgeries are offered at a reduced price. Approximately 99% of the Maryland SPCA’s budget comes from donations and fees. Dike and Milton recognized the urgency of the issue of animal homelessness and abuse, especially during the pandemic.

As pet owners themselves, the girls know how important it is to give their fuzzy friends love and care. They decided to raise $200 in monetary donations, collect supplies in bins at Severna Park High School, and create an Amazon Wish List. Items being collected include leashes, cleaning supplies, food, blankets and toys. With help from underclassmen, they have created Facebook and Instagram pages to increase awareness between classmates and friends.

As of January 5, they have raised $167, filled around three bins full of donations, and collected seven items from the Amazon Wish List. They hope to raise even more donations and awareness as they finish their project in early 2022.

Fish For A Cure

A team led by James Glebocki and Eddie Sullivan raised money and spread awareness for Fish For A Cure, an organization that funds critical psychosocial services needed throughout the cancer diagnosis.

The Fish For A Cure Organization was founded in 2007 when business associates wanted to enjoy their passion of fishing, enjoy the beauty of the Chesapeake Bay, and have fun with friends. They quickly changed their focus to cancer funding after one of the founder's wives was diagnosed with cancer. As avid fishers and students who have loved ones affected by cancer, Glebocki and Sullivan made it their goal to ¨kick cancer's bass.”

Together, Sullivan and Glebocki helped Fish For A Cure’s Junior boat raise over $2,000. This was done by advertising their cause on Instagram and other social media platforms, spreading awareness through word of mouth, and holding a restaurant night at Brian Boru Irish Restaurant and Pub.

Abby Johnson and Emma Marsh partnered with the Fisher House Foundation to support veterans and military families. With a team of three students, Johnson and Marsh raised $350 for the organization, surpassing their goal of $150, by fundraising online through social media and in person during school lunches.

The group meets during school every two weeks to advance the project. They have most recently met to create donation bins that were used to fundraise at Severna Park High School. Additionally, they have collected more than 15 home care items to donate to the organization and created COVID-19 care baskets to provide Fisher House families with necessary pandemic supplies.

To learn more and donate to Helping Heroes, visit www.instagram.com/helping.heroesfh/?hl=en.

From Folger To SPHS, Students Grow With Earth Day Festival