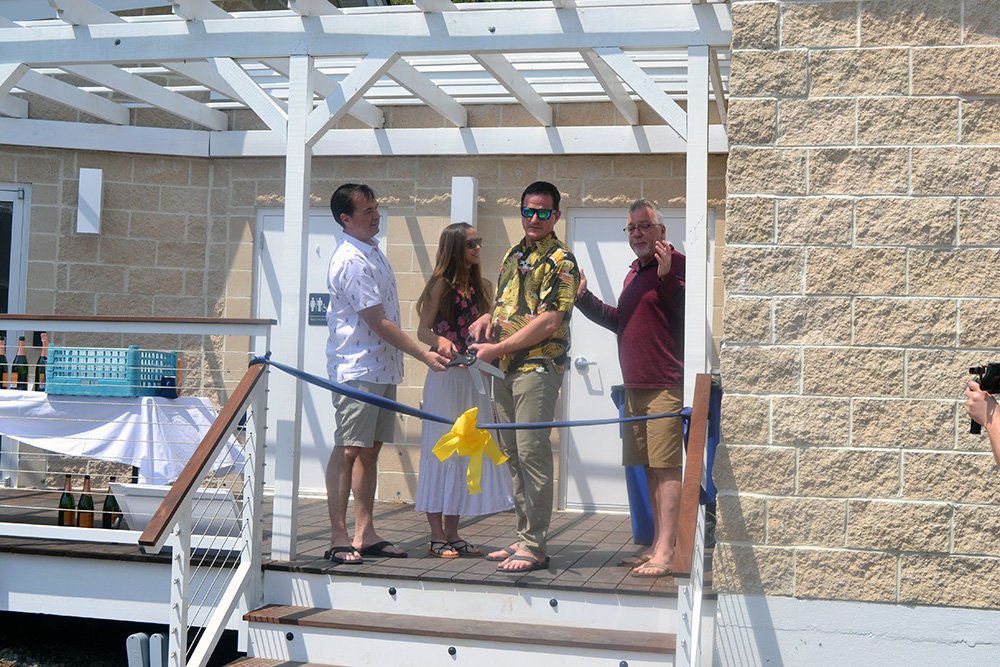 Olde Severna Park celebrated the completion of a new beach clubhouse during a ribbon-cutting on April 23.
Photos by Jonathan Katz 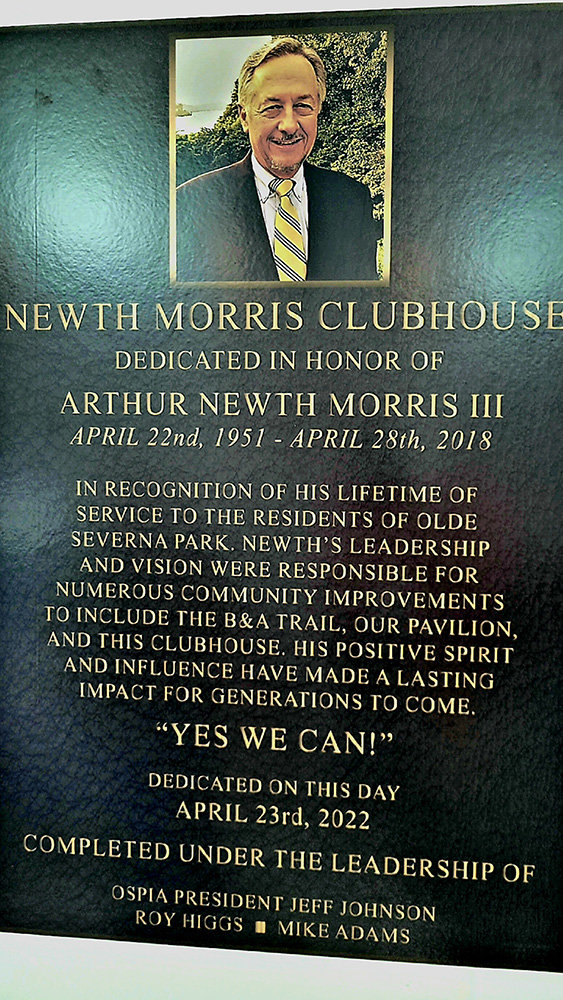 Olde Severna Park celebrated the completion of a new beach clubhouse during a ribbon-cutting on April 23.
Photos by Jonathan Katz
Previous Next
Posted Friday, May 13, 2022 11:46 am
By Judy Tacyn

After a decade in planning, the Olde Severna Park neighborhood celebrated the completion of a new beach clubhouse on April 23 with a dedication of the building in the name of Newth Morris, and a ribbon-cutting ceremony with more than 75 community members present.

Morris, a longtime Severna Park resident and community activist, died unexpectedly on April 28, 2018. He had been president of Olde Severna Park Improvement Association (OSPIA) on three occasions and at the time of his death.

According to Jeff Johnson, current president of the OSPIA, the neighborhood thrived under Morris’ leadership.

“During his tenure, Newth was instrumental in the planning and implementation of so many upgrades for our community,” said Johnson in a 2018 interview with the Voice. “Everywhere you look, Newth had his fingerprints on the improvements of the beach and the community. He headed up the planning and building of a beautiful beach pavilion.”

Johnson said the clubhouse was Newth’s vision. He led the early efforts to bring together people involved in making the clubhouse a reality. The Morris family also made a significant contribution (in honor of Newth) to the funding of the construction project.

The concept of building the clubhouse began as early as 2012 with Morris leading the charge. In 2018, the community voted for concept approval and started the design and permitting process. Just as the OSPIA applied for county building permits, Anne Arundel County swore in a new county executive and restructured the planning and zoning office. And then, of course, the pandemic happened.

The design of the building presented issues with Anne Arundel County permitting from the beginning, according to Johnson.

“In order to build the structure so that it did not impact the 100-foot tidal buffer and the 25-foot wetlands buffer, we decided to build below the flood line,” Johnson explained. “In order to get approval, we had to purchase flood barriers that can be installed if there is an impending flood. According to the county, this is their first time dealing with these barriers.”

“This was a true community ‘barn raising’ with the architect and general contractor members of the community who donated their time and expertise to build the clubhouse,” Johnson said. “Thank you to Roy Higgs and Mike Adams for their time and efforts to make this a reality.”

Johnson added that the OSPIA is working with local landscape architects to design a plan to incorporate native plants and ornamentals, including Morris’ beloved azaleas.

“The Olde Severna Park beach (Hatton Memorial) has been voted Best Community Beach by Severna Park Voice readers for many years running,” Johnson added. “Our community activities are centered around this hidden treasure. The clubhouse allows us to enjoy the beach year-round now and into the future.”

Letter To The Editor: Havenwood Park