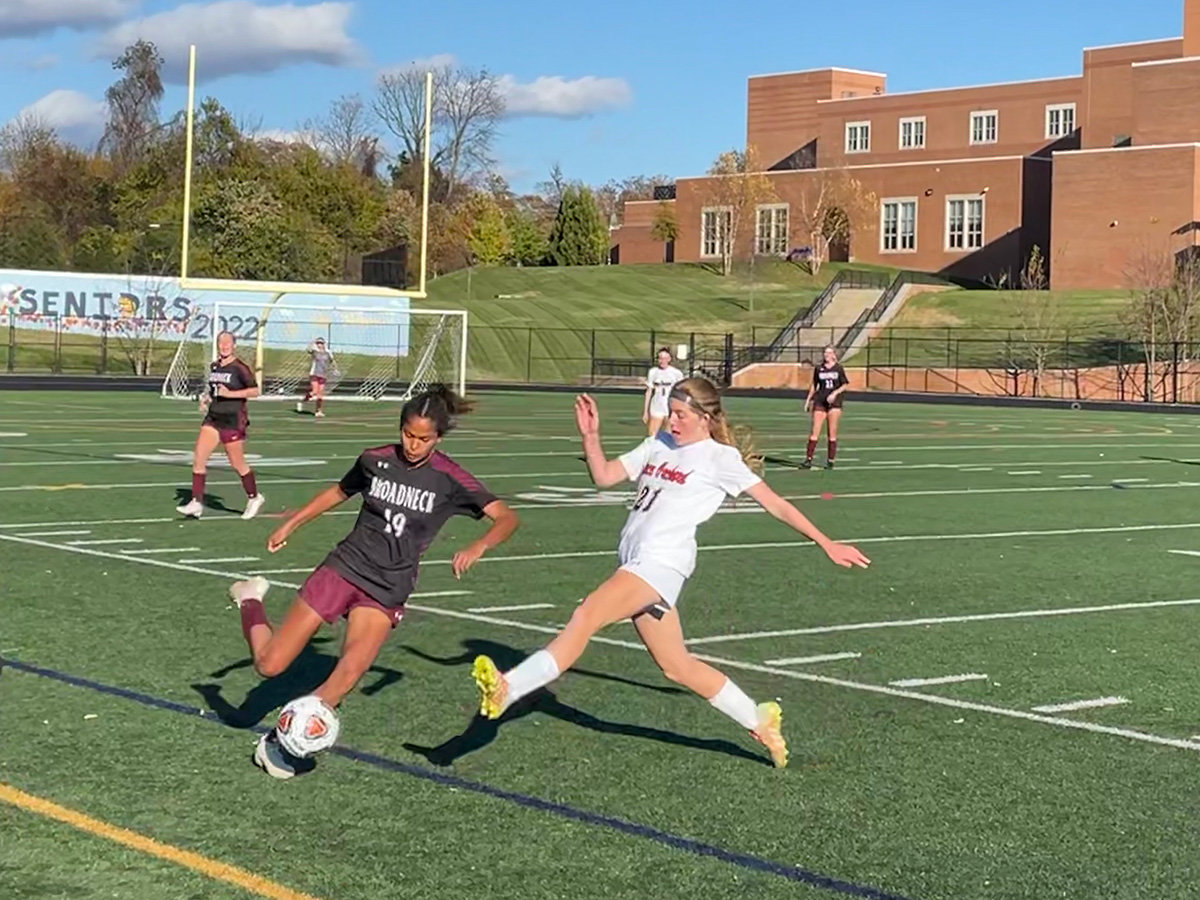 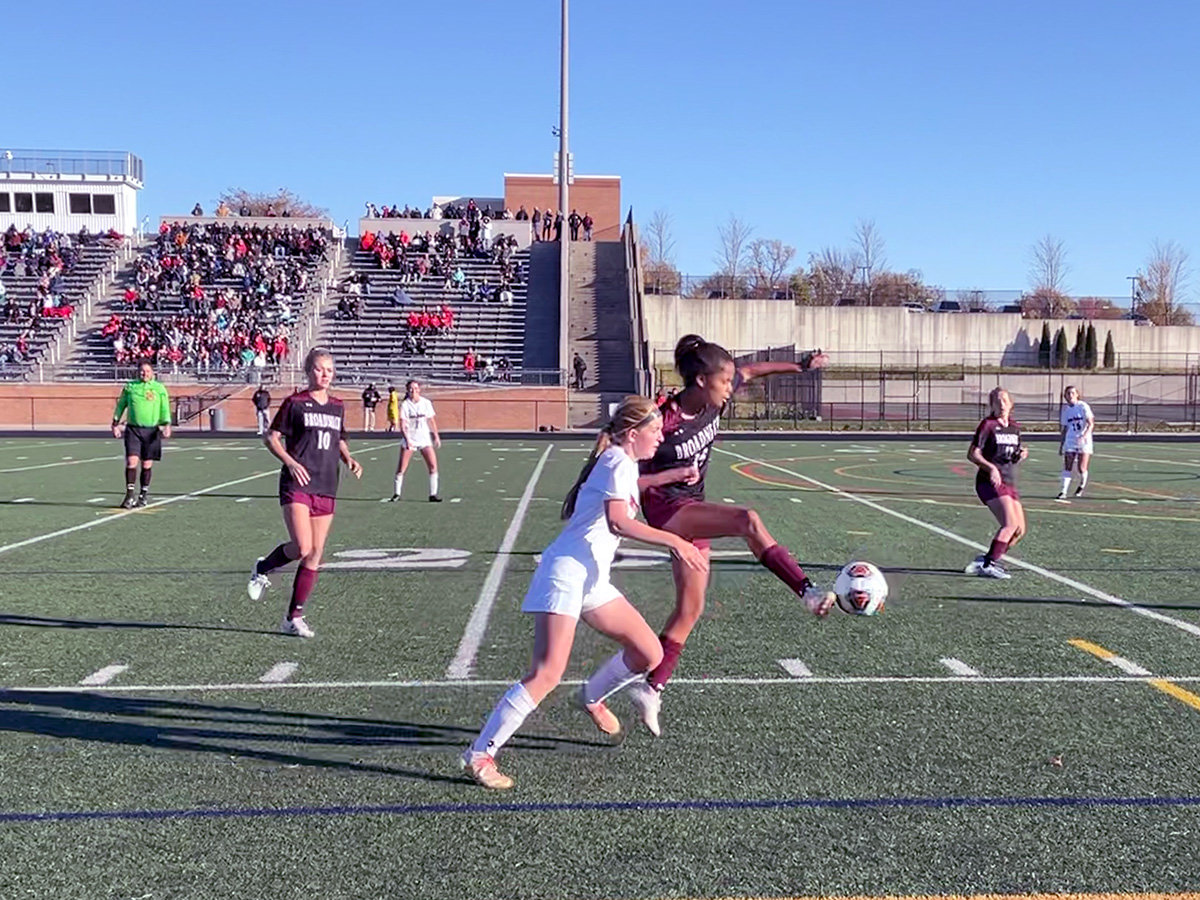 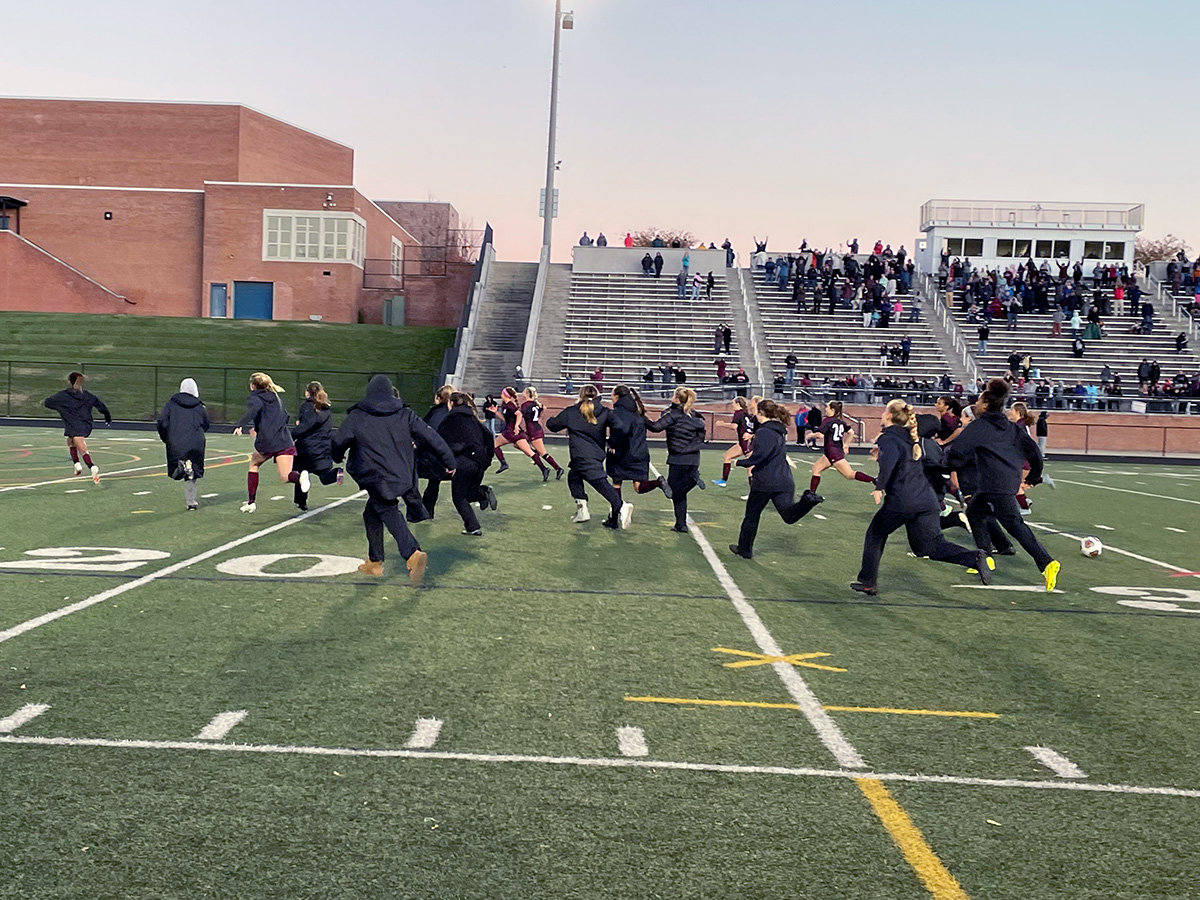 After winning their semifinal game against the Quince Orchard Cougars in a 4-3 shootout last Saturday, the Broadneck Bruins girls soccer team is advancing to the last game of the state tournament. The Bruins will face the Walt Whitman Vikings in the 4A MPSSAA championship at Loyola University on Saturday, November 20, at 7:30pm.

The semifinal last week remained scoreless through regulation and two 10-minute overtime periods. The teams were evenly matched and both made key offensive and defensive plays.

Fifteen minutes into the game, Quince Orchard forward Ellie Hodge crossed a ball into the box that Broadneck goalkeeper Mason Smargissi juggled but ultimately secured to end the scoring opportunity. With six minutes left in the half, Broadneck had an opportunity to score off a corner kick taken by forward and midfielder Maddie Capps, with Capps firing a shot that was saved by the goalkeeper after Broadneck passed the ball around the box.

Both teams had chances to put points on the scoreboard during the second half as well, but neither team was able to finish. Hodge, along with Cougars forward Reese Owens and midfielder Annie Faraone, took several shots on goal, but they were unable to beat the Bruins’ solid defense consisting of seniors Carly Johnston and Clementine McLemore, junior Lilly Kelley, and goalie Smargissi. The Cougars committed several fouls that led to direct kicks for Broadneck just outside the 18-yard line, but nothing got behind junior goalkeeper Carly Schaechter.

Although a win was not in sight until the very end, Broadneck head coach John Camm was pleased with his team’s performance under challenging circumstances.

“We played gritty. We could have played better offensively, but we’re really happy with the fight,” Camm said. “It’s November soccer, the wind is swirling, the sun is at a weird angle — it’s really hard to play pretty soccer. And we thought let’s come out here, grind out the game, and hope for the best.”

A penalty kick shootout was needed to determine the winner. Faraone was first to the line for the Cougars, but Smargissi made the save by diving to the bottom left corner of the goal.

“It definitely gave me confidence going into the next ones knowing that I guessed right the first time,” Smargissi said.

Reagan Baldwin then scored for the Bruins with a shot to the top left corner of the goal, putting her team in the lead. Five more balls were successively put in the back of the net with Rachel Swartz, Carli Sullenger and Erin Hodge scoring for Quince Orchard, while Sadie Wilkinson and Éva Mowery scored for Broadneck. With the shootout score tied 3-3, Johnston missed the Bruins’ next shot by hitting the top right corner of the goal post. Quince Orchard followed with their own miss, as Megan Moon shot the ball over the top of the goal. Broadneck needed to score on their fifth shot to win, and Capps kicked the Bruins into the finals.

“Leading up, I knew I had to make it in order for us to win or we would have to take more, and I didn’t want to put the pressure on the other girls,” Capps said. “I just knew that I had to place it and not drive it because that’s what our coaches always talk about, and after, I was just so relieved because everyone gave this game their all as if it was our last game, but we have one more left.”

Broadneck players rushed onto the field to congratulate their teammates and Quince Orchard left John Harvill Stadium after a long hard-fought game. Cougars head coach Peg Keiller thought the play from her team was not as strong as it could have been, but she is hopeful for future seasons as she had four freshmen play a majority of the game.

“We weren’t really ourselves in the first half too much — maybe a little nerves, lack of composure — but I felt like in the second half we played a little bit more of our game,” she said.

Broadneck will continue to train with their trademark intensity, grit, focus and skill throughout the last week leading up to their final game.

“I’m excited,” Smargissi said. “I love this team. We’re a big family. And I think we can get the job done. Let’s go get rings.”