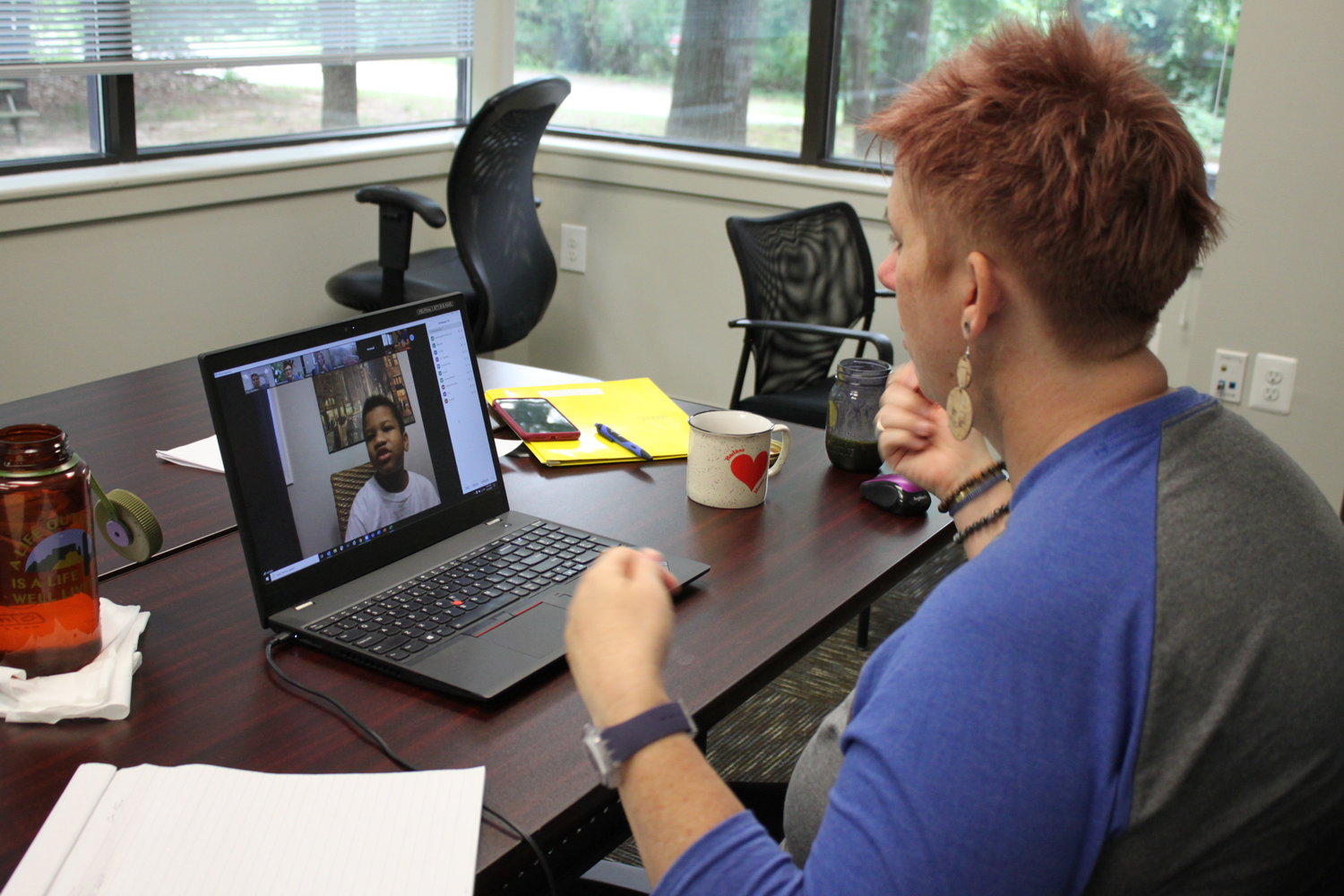 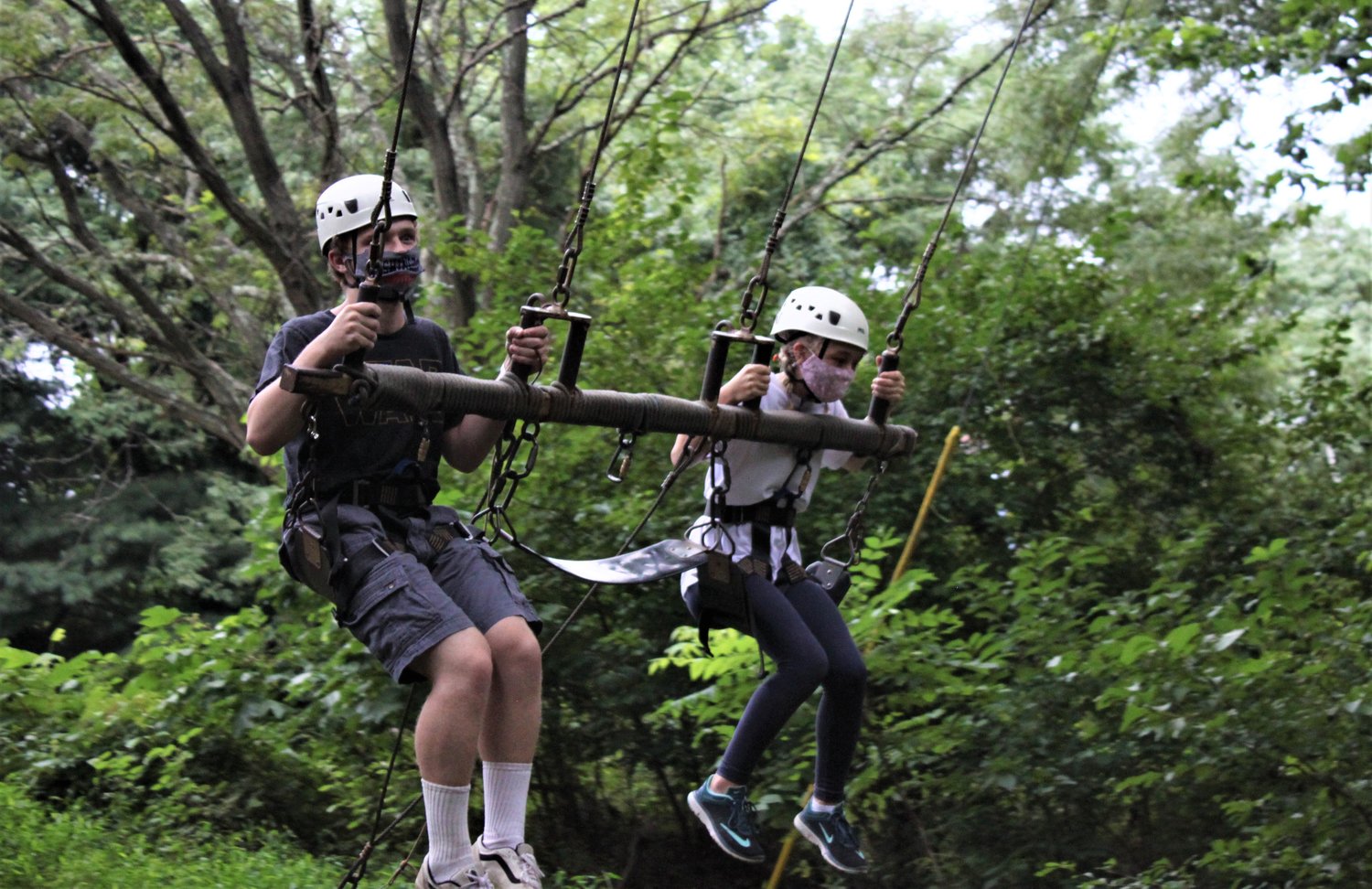 From left, Jeremiah Faust and Lillian Cross rode in a swing that flew high into the tree canopy during Camp Phoenix Teen Grief Camp held at Terrapin Adventures in Savage, Maryland.
Previous Next
Posted Thursday, September 10, 2020 11:12 am

Wearing a gray and blue baseball jersey with “Chesapeake Life Center” emblazoned across the front in a sporty swoop, Amy Stapleton stretched her arms straight out in front of her, palm to palm, and then made a scissor motion. “Didn’t someone say alligator?” Stapleton said.

A small voice from a computer in front of Stapleton spoke up, “Yes, but it’s not an alligator.”

“It’s a crocodile,” the boy responded. “They are very different.”

On the second day of Grief Burst 2020!, the group of children ages 6 to 12 were playing charades with the counselors via Zoom. They had already gotten to know one another, already feeling comfortable to share in games, crafts, yoga, and more importantly, talk about how they feel after losing someone important in their lives.

“What does the word ‘grief’ mean to you,” Stapleton asked the children whose heads appeared as if in windowpanes on the screen before her.

“It’s how you feel after someone in your family dies,” one of the campers said.

For more than 28 years Chesapeake Life Center has facilitated grief camps that had children holding hands in a circle and getting encouraging hugs from their own adult volunteers known as Big Buddies. In the face of COVID-19, the team had to rethink how they could continue with this vital service for grieving children. Which was how Grief Burst 2020! began.

Stapleton, the center’s manager of bereavement services, said that they still needed to ensure the time spent online had some of the same fun associated with camp while allowing time for some grief work. The children each received a camp kit, delivered by a Hospice of the Chesapeake team member, filled with all the things they need for camp – a T-shirt, craft supplies, activity sheets, and other fun items. They were instructed to not open the kit until the day of camp, so they could all share in the discovery together.

The counselors and kids met for two 90-minute sessions over two days with families joining in for a third and final session. The family day is important time for the team to reinforce what the children have learned by meeting with the families at the end of camp. In the end, the people those campers live with every day are the people who will continue to support them in the work of coping with loss. “The best predicter of how kids will do in a time of grief is how the adults around them are doing,” Stapleton said.

Of course, the camp included some discussion about the pandemic. Stapleton said that COVID-19 brings its own sort of grief, which compounds the grief of losing someone dear to them. They are not able to experience the rituals that come with mourning, and not able to connect with friends or family in person. “I talk a lot about ambiguous loss. It’s a type of grief to not be able to go back to school right now.” Stapleton said. Being able to talk about it with others experiencing the same thing, even if it is through a computer screen, gives them a sense of normalcy. “They see that they’re not alone in feeling these feelings.”

This is especially important with teenagers. The center was happy that they were able to move forward with the plan to have a small group of teens for its annual Camp Phoenix take part in an adventure camp at Terrapin Adventures in Savage, Maryland. “For teenagers, their peer group is their community, so they’re already feeling isolated,” Stapleton said. Working with the facility, they were able to plan physically distanced activities held outdoors with teens and counselors wearing facemasks.

Stapleton said having the support of the organization, the families and the community helped to make camps happen when other hospice organizations’ bereavement programs were unable to hold their camps this year. As important as it is to the children, that achievement is also fulfilling to her colleagues and her. “It is awesome to see how kids show up for each other in ways that help them release what’s going on inside of them and in the world and do that in safe ways, with a lot of support,” she said. “And it’s always a reward for them to find joy and to realize it’s okay to be happy again. They can love someone who died but the death doesn’t have to define their life.”