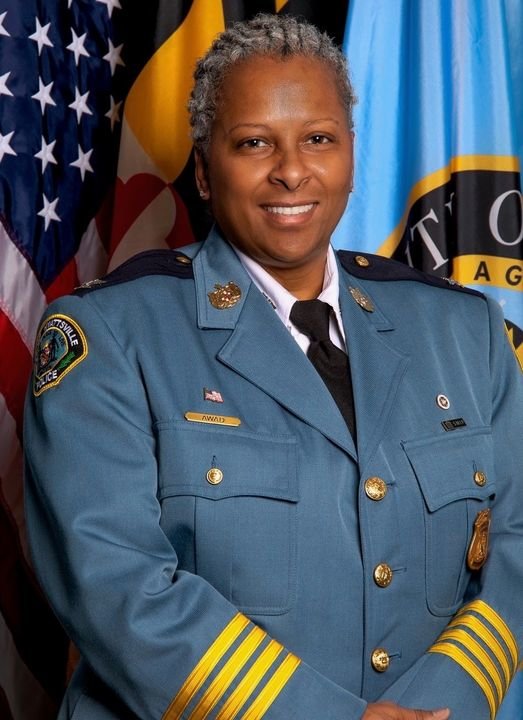 Amal Awad said she is dedicated to building trust between the police department and the community.
Posted Friday, December 11, 2020 10:16 am
By Zach Sparks l zach@severnaparkvoice.com

County Executive Steuart Pittman and his team considered 40 applicants for the position of police chief, and after getting the approval of community leaders and the county council, Pittman chose Hyattsville Police Chief Amal Awad to take over the department on December 17.

“I have dedicated more than half of my life to this noble profession, and I thank Mr. Pittman for selecting me to lead this professional police department during this pivotal moment in modern policing,” Awad said.

Former Anne Arundel County police chief Tim Altomare resigned in August, a vacancy that was filled temporarily by William Lowry, who worked with Awad in 2013 and 2014 when she was the department’s chief of staff.

Her extensive experience and familiarity with Anne Arundel County were appealing to Pittman and his staff.

“Chief Awad’s experience in both large and small department policing, including right here in Anne Arundel County, makes her ideally suited to lead our department,” Pittman said. “But for me, that wasn’t enough. I had to be sure that our next chief had that rare combination of professional skill and heart. Heart for the people in our communities, heart for the officers that protect them, and even heart for the young people who are trying to find their way in these difficult times but sometimes make mistakes.”

Awad understands that people make mistakes, and she’s dedicated to building trust between the police department and the community. As one example, she supports civilian review boards that hold police accountable.

She also wants officers to have the support they need.

“It’s important to invest in our officers, not only their equipment and resources, but the intangibles: mental wellness, making sure our officers are OK as they go out on patrol about their duties,” Awad said. “They see trauma on a daily basis, and it’s important for us to talk to them about how they’re feeling and making sure that they have every resource available to them to move through those challenging moments.”

With the City of Hyattsville, Awad oversaw one of two departments in Maryland that participated in a curated tour of the National Museum of African American History and Culture. She wanted her officers to understand why some populations might harbor a resentment toward police.

“It’s impactful, not just for me, but for other women aspiring to leadership positions whether or not within public safety or whatever their professional desires,” she said. “I think it helps folks who may or may not have experienced an upbringing that would have afforded them opportunities that others have.”

Awad was 9 years old when her father left her mother to raise seven kids alone.

“I admire her strength, her tenacity, her resilience,” Awad said. “I carry a lot of that with me and I know that there are people like me who have been in similar situations with their upbringing with perhaps just one parent in the household and that parent sacrificing everything to make sure their children realize opportunities that are challenging to accomplish in some communities.”

“This is a person who can unite us,” Pittman said. “She is a peacemaker and a consummate professional.”

Congratulations To The Best Of Winners