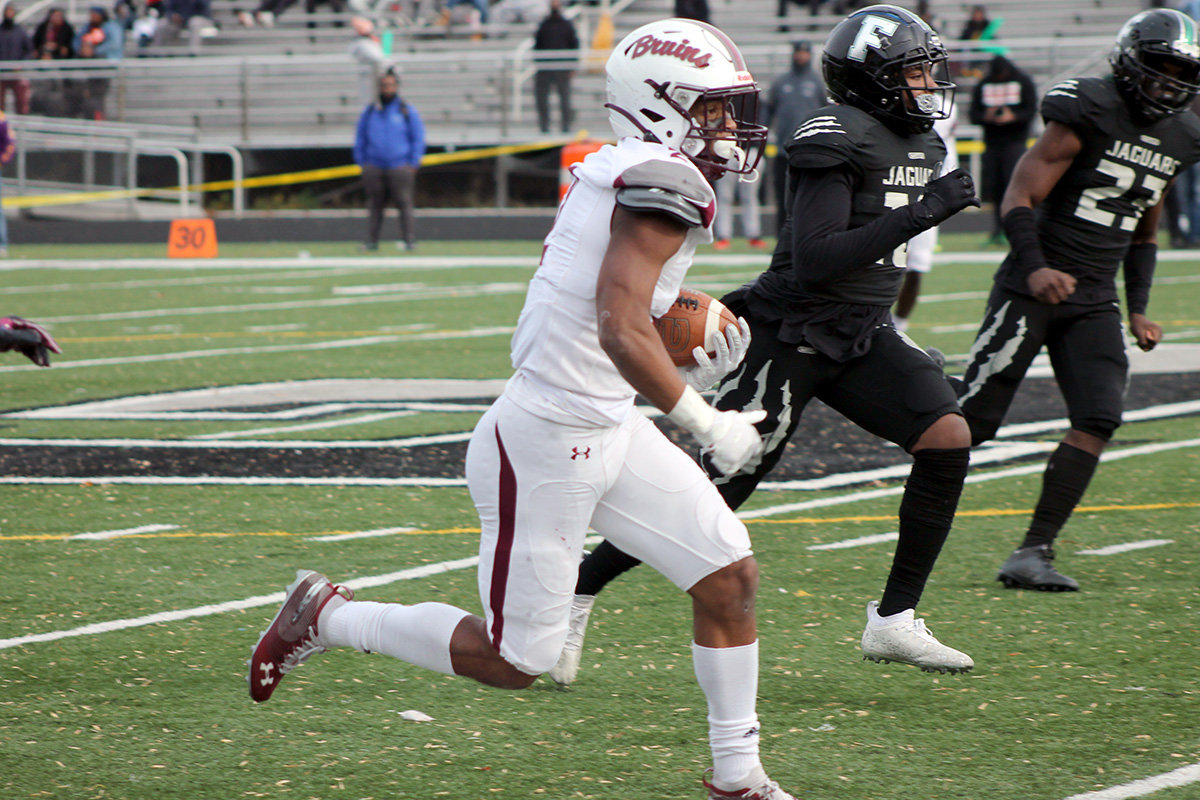 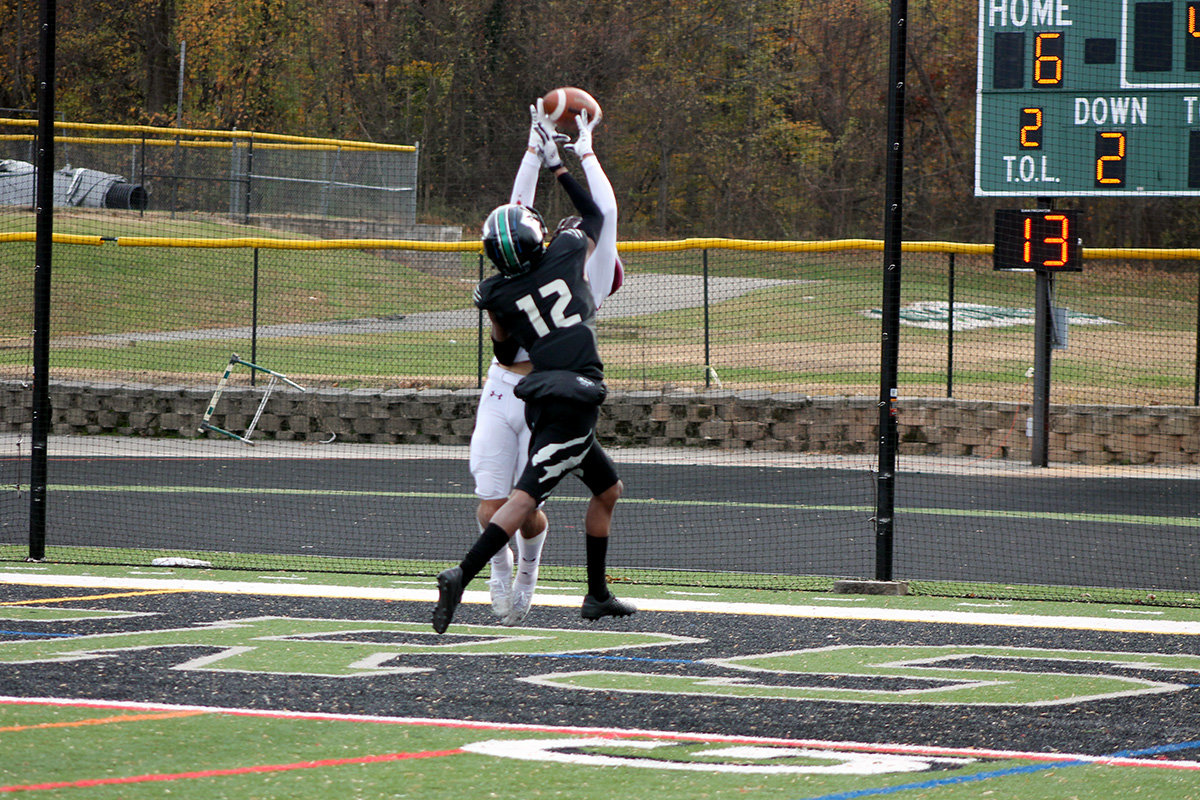 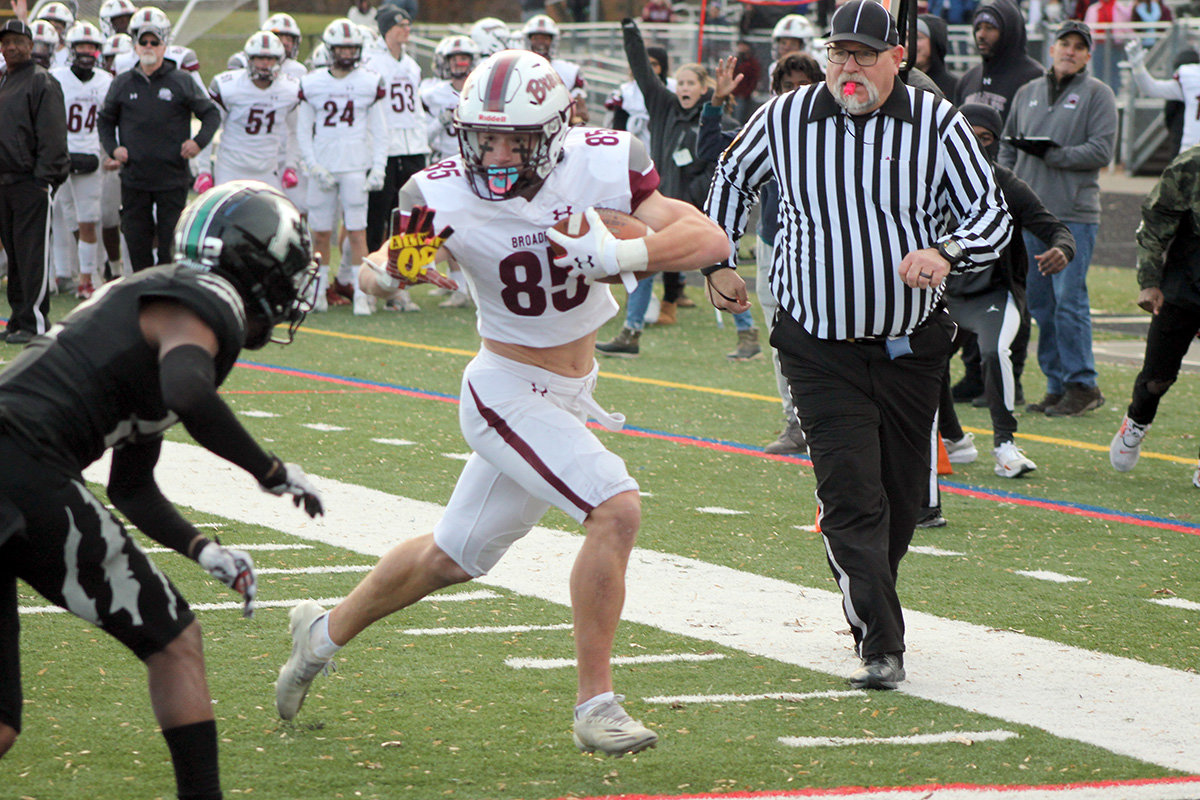 Nathan Leviski prepared to avoid a tackle at the goal line to score a go-ahead touchdown.
Photos by Conor Doherty 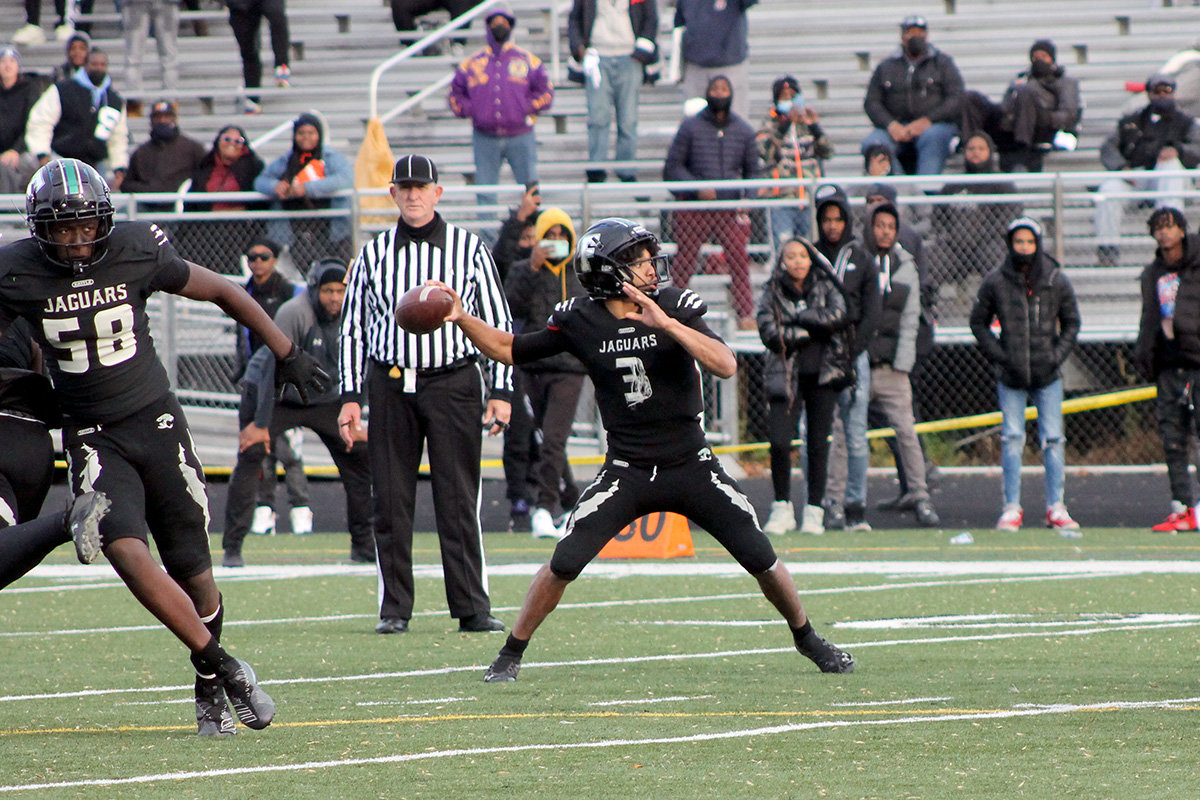 As the football fell harmlessly to the ground, Bruins players looked stunned and the opposing sideline erupted in celebration. Playing in the state quarterfinals against the Charles Herbert Flowers (C.H. Flowers) Jaguars, the Bruins lost 43-36 in overtime, coming up six yards short of extending the game to another overtime period.

Both teams took a while to get going as the first quarter came and went without either of them getting on the board. But the second quarter brought an offensive explosion as both teams began to find their rhythm. The Bruins got the scoring going on a 1-yard touchdown on 4th-and-goal early in the quarter. After forcing a punt, the Bruins struck again, needing just one play for senior running back Davion White to run 55 yards to double their lead. The Jaguars then responded with a 52-yard rushing touchdown to cut the lead to 14-6 with a missed extra point thrown in.

After the Bruins drove 69 yards in just four plays to extend their lead to 21-6, the Jags had their own long drive of 70 yards as they scored on a 21-yard touchdown run, punctuated by a Bruins defender getting run over by the Jaguars running back on the play. The Jags two-point attempt didn’t succeed, leaving the score at 21-12. And on their ensuing drive, Bruins senior quarterback Josh Ehrlich connected with a wide-open Eli Harris on a 51-yard touchdown pass to take a 28-12 lead into halftime. Altogether, the teams scored six touchdowns on six consecutive drives with nearly 400 yards of offense between the teams on those drives.

“We did not think we were the underdogs, coming into this game,” said Bruins head coach Rob Harris. “As good as the execution was in the first half, it was just as bad in the third quarter.”

The bad execution Harris referred to was the offense stalling in the third quarter and two badly shanked punts, one of which traveled 13 yards and the other just six yards. Both punts set up the Jags inside the Bruins’ 35-yard line and they were able to turn those mistakes into touchdowns, cutting the Bruins’ lead to two points, 28-26, entering the fourth quarter.

For most of the second half, Ehrlich looked rushed and was forcing bad throws, none worse than the pick he threw as the Bruins were driving inside the Jaguars’ 30 yard line. The Jags drove down the field on the ensuing drive and took a 33-28 lead. But Ehrlich responded, moving the Bruins down the field to retake the lead at 36-33.

“Coach was able to calm me down and we were able to get into the end zone,” Ehrlich said.

The Jaguars were then able to get into field goal range, making a 22-yard field goal to tie the game. After scoring on a six-yard touchdown in overtime, the Jaguars stopped the Bruins from extending the game, sending them onto the semifinals and leaving the Bruins lamenting what could have been.

“It was a pleasure to be their coach,” Harris said. “Enjoy the journey; this moment was tough for them. But the journey to that last play is what makes it special.”